So this column was politely declined by Savvy magazine as it’s, er, a bit more eccentric than the type of travel column one might ordinarily expect…

Smaller than Whangarei and with just a few hundred residents, Great Barrier Island is a slice of pure New Zealand with very little farm pollution, tonnes of wildlife and astonishing mountains and forest. It takes just 90 minutes to drive our sixth largest island from the south to the north, in a car which may or may not have seatbelts. Or a windscreen. It’s a wild island with few straight roads, a couple of hamlets, and more tramping tracks than pavement. You’ll see kaka flitting overhead and gape at the magnificent rainbow undersides of their unmistakable wings. You’ll be startled by a banded rail trotting across the path. The island teems with snapper, pigs, geckos, weta, skinks, rare birds and plants, magnificent subtropical rainforest… and Reddus neckus, a rare species pushed to the brink of extinction around the time of that pesky Civil Rights Movement. 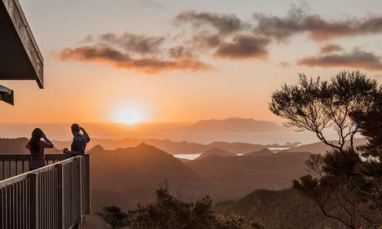 I visited the Barrier in the off season, corresponding with a backpacker lodge owner to secure a bed and room while I roamed the island hunting my quarry. After experiencing the bliss of wild hot springs in the bush during rainfall, traipsing towering cliffs, cascading waterfalls and craggy peaks, and enjoying the magnificent and brand new Mt Heale hut, with its unrivalled view of the Gulf Islands, I returned to my lodge, despairing that I would likely leave the island without having found my racist rodent.

It was a dark, wet Thursday night, after the lodge owner had consumed a bottle of chardonnay and all the other guests were asleep that the redneck crept out of the darkness. I was impressed: my chimera had disguised itself as a gentile human all this time. Its neck was a scorched crimson; its skin, the colour of pale cardboard. The creature had hidden in plain sight all week til finally, now that my guard was down, it felt comfortable showing its true colours. Indian people, Arabs, Auckland Council phone operators trying to offer him assistance with paying his rates: all were dismissed with an eloquent range of slurs showing the racist could summon a truly impressive vocabulary from its throat sack. To have taken photographs of R. neckus inferior would have startled the brute while it sang its lonely song of hatred. Perhaps anthropologists reading this may wish to make the first recordings of its song, to be archived in the Smithsonian.

Great Barrier Island recently became a Dark Skies Sanctuary. It is an island of stillness and tranquillity, mostly given over to stunning rainforest. Travel in a pack of liberals to keep yourself safe from the redneck’s nasty bite.