How many volcanoes have you climbed since Monday? Up the top of the country, you could do a volcano a day for a week and never get burned or frostbit. Yes, what Northland lacks in snowy peaks, it makes up for in rocky volcanic knobs (long-since cooled, we can assure you). The peninsula is the country’s most-remote region and is decorated with prominent stone mountains in bizarre shapes, and lain with well-maintained tracks to the top.

The best part of it all: each peak is climbable in less than two hours return and – considering Northland’s gentle subtropical weather – views are reliable.

From Bald Rock to Paul’s Rock

Why not begin your journey through Tai Tokerau at Volcano 1, the landmark 238m Bald Rock in Kaiwaka, 90 minutes north of Auckland. Carry on another two hours north along SH1 and you’ll get to Whangaroa Harbour. There, the perfectly bell-shaped St Paul’s Rock (volcano 2) is at the top of Old Hospital Road above Whangaroa’s quaint seaside village. It’s less than one kilometre from the car park to the top of this volcanic dome. Across the water, if you can make it over there, is volcanic remnant number 3, Duke’s Nose, described as “Tolkienesque” by the local newspaper.

Whangarei Heads: three volcanoes for the price of one

Your next cold volcanic cone, Mt Manaia, sticks out on Whangarei Heads like a collection of candlesticks. From some directions, this andesitic agglomerate volcano resembles a human face; from other directions, you’ll see bagpipes, a birthday cake or a castle. Manaia – a hugely popular two hour return climb to 420m – is sacred to local iwi Ngātiwai. The craggy peaks represent ancient tribesman Manaia, whose family were turned to stone in a dispute over the infidelity of Manaia’s wife. 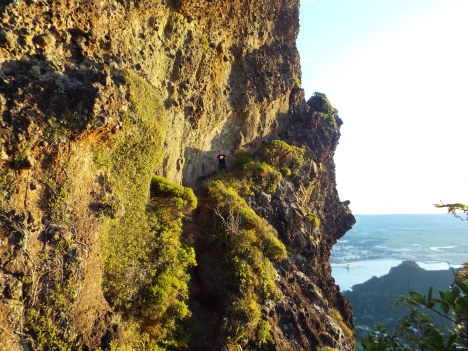 The same volcanic magma pipes which crafted Manaia are responsible for the rocky knobs of cold cauldrons Mt Aubrey (215m) and the epic Bream Head (490m) and Mt Lion (395m) – all of which are within a 15 minute drive from Manaia.

These are volcanoes 4-6 in your week’s journey. Each of these mighty peaks is walkable within a morning or afternoon, though you can expect some 45 degree climbs.

Maungaraho is a shark fin of solidified magma that was once the plug of Tokatoka Volcano which erupted nearly 20 million years ago. To climb to its trig point, you’ll need to haul yourself up chains for the upper half of the 30 minute climb. To get to Maungaraho, just drive 20 minutes south of Dargaville along State Highway 12 then turn onto Mititai Road.

The second part of volcano 7 is just up the road. Tokatoka is a needle of a mountain, just 180 metres high. It’s a far sharper, pointer version of its sibling. The difference is at the bottom of this one, the Tokatoka Tavern awaits.

This story should’ve been published in AA Directions magazine September 2018 but then they declined it. What gives, bruh?